What Is A Team?

Agile in general, and Scrum in particular, relies for success on self-organizing teams. The eleventh of the principles behind the Agile Manifesto states that "the best architectures, requirements, and designs emerge from self-organizing teams"(1). Empowering the team is one of the seven principles of Lean. One of the central Scrum patterns is 'Stable Teams' (2). But, before we get on to the notion of what empowerment and self-organization means, maybe we should first sort out what a team is? There might not be a term in the English language more abused than 'team'. 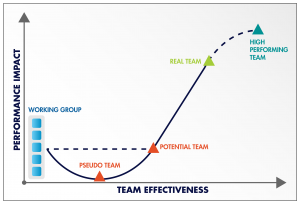 I think every manager I've ever spoken to has talked about his or her "team", but very often they are referring to individual, discrete reports who never talk to each other and sometimes don't even know each other. What kind of "team" is that? It isn't one, of course. So what do real teams look like?

Fortunately, some work has been done on this that we can leverage. J.R. Katzenbach and D.L. Smith in their book, The Wisdom of Teams: Creating a High Performance Organization define a team as "...a small group of people with complementary skills, committed to a common purpose, performance goals and approach for which they hold themselves mutually accountable." Now, these authors weren't looking at Agile development teams, or by and large, product development teams at all. Mostly they looked at management groups and found that many groups that called themselves teams were not real teams, and many that were didn't describe themselves as teams at all - hence the need for the definition they give. However, if you follow Scrum, the attractiveness of this definition is obvious.

First, "small group": Scrum teams range from 5 to 11 persons if you include the Scrum Master and Product Owner. Next, "complimentary skills": Scrum's development teams are cross-functional. They include all the skills necessary to deliver the product. Then we have "committed to a common purpose, performance goals...": Scrum teams are guided by a product vision maintained by the Product Owner and set their own performance goals each Sprint in the form of a Sprint Goal. They exhibit collaborative behaviours ("common approach") to achieve their goals and hold themselves mutually accountable for their work. This is sometimes called the 'musketeer approach' ("all for one and one for all").

Importantly, Katzenbach and Smith explain that their definition of a real team is not just a list of characteristics but is, in outline, a description of the discipline groups must perform - a daily diet, if you will - if they are to grow to become a real team. You don't get real teams by decree or by flicking a switch. The process is a journey that requires patience on the one hand since it takes time, and investment on the other because a conscious effort to form real teams is required.

So, what are the groups that are not yet real teams? The book describes the notion of a working group - a collective whose performance requirement is no more than the sum total of their individual contributions. It is only when the needed performance level is a whole greater than the sum of its parts that a real team is required. And the journey is not free of risk. All of us, since we were children at infants school have been judged as individuals. The same was true when we went to junior school, secondary school and college. We are typically assessed for our performance at work as individuals. If we've been judged fairly then at least we have a sense of our destiny being in our own hands. But when you are assessed as part of a team you are being asked to give up some of that control and to put your fate in the hands of others - the team. This requires considerable trust and trust at that level does not come overnight. It needs to be earned through experience.

Consequently when working groups are put into "teams" their performance often drops. They have no sense of a common purpose, still work individually rather than collaboratively, but now have the overhead of team meetings to hinder their productivity. They are pseudo teams rather than real teams. The Wisdom of Teams depicts the journey graphically via The Team Performance Curve (fig. 1). Groups that understand they have a common purpose, at least, but have not yet developed the collaborative skills to achieve it are called potential teams in this graph. They look much more like teams but their performance level is no better yet than that of the working group. The biggest gain in performance is when the potential team transits to a real team. When real teams go beyond that definition and members have a deep commitment to each other as well as the goals they are trying to achieve, then real teams can become genuinely high-performing teams. Often, they not only outperform comparable other teams, but do so to an extent that nobody anticipated beforehand. Every Agile team should aim to become a high-performing team.

Teams, let alone high-performing ones, need investment just to become real teams. The challenge for Agile adoption is how best to target that investment. Agile is, after all, a paradigm shift from the way products have been traditionally put together. By definition, it involves disruption of the organization at some level. There are trade-offs. Organizations need to decide how much cost, how much pain to endure to achieve their business goals through Agile. This is where the self-assessment of Agile teams comes in. By first identifying the goals to be achieved, realizing why they are important and determining how to recognize when they have been achieved, high-performance team coaches can identify what level of "Agile Fluency" the team or teams need to get there. Working with the teams to perform a gap analysis, the coaches can help organizations focus, laser-like, on the next steps the teams need to take on their high-performance journey, and on the resources and support, they need from their management.

Putting together an investment plan for Agile is non-trivial. Most organizations need expert help from outside first to shape the initial plan and later to assess its impact and outline the next steps to be taken based on that data. Ultimately, these coaching skills need to become embedded internally but, in the mean time, there are facilitators that can use a variety of models and techniques to help organizations and teams self-assess. The cost of external consultancy is more than outweighed by the advantages. A single team that "breaks even" in terms of delivery of value with its salary cost of, say, PS600,000 p.a will, by improving by a mere 5%, add PS30,000 of value every year. And with a stronger improvement of between 10% and 20%? And over five years? And with multiple teams? Literally millions could be added to the balance sheet.

Do the maths. Invest in your teams.

Learning Tree's expert Agile consultants can provide services to help organizations and teams self-assess to identify their next steps forward. Tools range from simple questionnaires to full application of the Agile FluencyTM diagnostic. For an initial chat call