The Real Role of the Business Analyst: Connecting Strategy to Action

If business analysts were just people who "analyze businesses" they would have, at most, a passive role that wouldn't contribute to their organizations' achieving their goals. The real role of the business analyst is a far more active one and provides the essential link between the organization's goals and its IT projects.

Business analysts who adopt a passive approach of only providing "analysis" as an input to the people who actually make things happen are letting their organizations down. In a world with a constantly changing business environment, if businesses are going to achieve their goals, BAs need to take a more active role. That passive role is an easy one to fall into. Wikipedia, for example, defines four kinds of business analysts...but all four definitions use words like "identify," "define," "standardize," and "interpret." Those are four passive verbs, suggesting that BAs don't actually "do" anything.

You can see that more active role in the definition used by Villanova University. Villanova describes BAs as "the vital link between a firm's information technology capabilities and its business objectives." Business analysts, for Villanova, are instrumental in "corporations achieving their goals" and make achieving those goals "happen more efficiently and effectively."

Succeeding in that role involves a lot more than "identifying" things. To achieve that link between business objectives and technology, BAs play a role both at the enterprise level, where strategy is made, and at the team level, where projects are implemented. 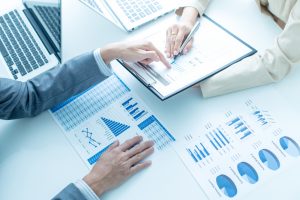 An Active Role at the Strategic Level

Learning Tree's course The Strategic Role of the Business Analyst, describes the business analyst role at the enterprise level as critical to helping the organization adapt to a changing world. The BA does this by answering these three questions:


A Critical Role at the Team Level


But, to provide that link between the organization's objectives and IT, BAs also have to play a role at the project team level.

In an earlier blog post, I described the BAs' role on Agile teams as ensuring "that the delivered solution is a real solution for the organization" ("ensuring" isn't a passive verb either, by the way). If that sounds like the role of the product owner in Agile projects, that's not an accident. The International Consortium for Agile's course Business Analysis Introduction: Defining Successful Projects describes the BA's role at the team level as having a "large overlap" with the product owner. The difference between the two roles is "largely in the authority levels": People called 'project owners' have more authority; People called 'business analysts' have less.

To ensure teams deliver real solutions, Scrum.org describes the BA/product owner as responsible, among other things, for three tasks: