Poor estimating is one of the key reasons so many projects run over budget and behind schedule. There are many reasons for poor estimating practices. For example project teams aren't allowed the time to investigate the upcoming work or senior management imposes infeasible deadlines. But one overriding problem is that project teams have a lack of understanding how to do estimating. There are many excellent estimating techniques from the Delphi technique, three point estimating and Monte Carlo analysis, but one of the most practical, easy and thorough approaches is called planning poker. Not only is it highly effective, but it also allows you to (legitimately) play cards at work! 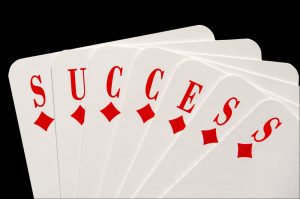 Planning poker comes from an approach to managing work called Scrum. Scrum is what's called an agile approach. Agile projects try to be more responsive to change, collaborative and try to deliver value to their customers quickly and regularly.

A planning poker session starts with a group of people who are subject matter experts in the work to be done. A facilitator gives each person a set of cards. This could be a standard set of playing cards; however, many Scrum teams use special planning poker cards. Each planning poker card contains a number from an irregular series such as Fibonacci. (1, 2, 3, 5, 8, and so on) The lack of regularity is supposed to reflect the randomness of estimating. Sometimes there is a card with a question mark in case anyone is stuck.

The group agrees on a benchmark task that they are all familiar with. Next the team starts to discuss each individual task that needs to be estimated. Each member of the group needs to estimate how much bigger (or smaller) they think it is compared to the benchmark task. Each person picks a relevant card and places it face down on the table. Everyone turns over their cards simultaneously to prevent anyone being influenced by anyone else's estimate. The people with the lowest and highest estimates then have an opportunity to explain their figures. The group repeats the process several times. The final estimate is the average of the last round of results.

Planning poker and also scrum come from the software engineering industry. Developers might be trying to estimate how long it will take to develop a new release of their product. A planning poker session would run through each feature planned for the next release and estimate how much bigger or smaller it is compared to a feature that the team have worked on previously. Using this data they can often predict fairly accurately the time and effort required for the next release. However project teams from any industry could use planning poker. I have seen it used successfully to plan a conference, to publish a book and to build an oil rig!