Battle of the Planning Tools: Gantt Charts versus Burndown Charts

[:uk]In this article I will look at two useful planning techniques: creating Gantt Charts and creating Burndown Charts. Both have their pluses and minuses. Gantt Charts were named after Henry Gantt, who invented them in the early part of the twentieth century. Burndown Charts are often used in agile environments to track the progress of projects.

Gantt Charts are a graphical way of depicting what work needs to be done on a project. They show the tasks to be done, the ordering of the tasks, their start and end dates and which resources are assigned to do each task. An example of a Gantt Chart is shown in figure 1. 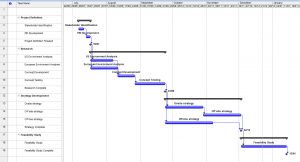 Most project managers use planning software to create Gantt Charts. The most popular planning software is Microsoft Project. Planning software makes it quick and easy to create the charts, change the format of the diagram to highlight different aspects of a plan and also update a plan as a project progresses. On large projects, Gantt Charts can become quite complex, so software like Microsoft Project can quickly work out the knock on effect of changing one aspect of the plan, such as delaying the start of one task or reducing the number of resources, on another aspect of the plan such as the end date of the project.

Another useful feature of a Gantt Chart is adding milestones to show when significant points in the project have been reached. These are usually represented as black diamonds and you can see some examples of these in figure 1.

In my projects I find it useful to print out a large copy of the Gantt chart each week and hang it up in the project room during team meetings. This helps the team discuss how they will work together and helps them see the interdependencies between all their tasks.

Project manager sometimes create Gantt Charts with too much detail too far ahead in the future. This is not realistic, as these detailed forecasts are unlikely to be accurate. It will lead to overly complicated diagrams which are time consuming to update and maintain. At the other extreme some project teams create Gantt Charts which are too broad. Whilst these sorts of charts are quick to create and update, they do not provide enough detail to help project teams plan and co-ordinate their work. A balance between these two extremes is the best way of using Gantt Charts.

Some project managers find Gantt Charts overly complicated to use. If that is the case they might decide to use instead the Burndown Chart format. Burndown Charts are widely used in agile projects. They do not show the relationship between all the tasks and who's doing what and when. However they clearly show the amount of work that remains to complete the project and how this estimate is changing over time. Figure 2 shows an example of a Burndown Chart. 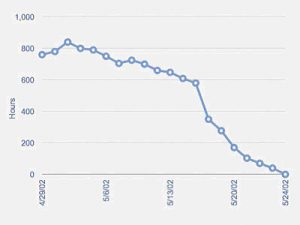 This trend line is known as the Burndown Chart's velocity. Not only can the velocity be used to predict the end date of the project, but it also shows the capacity of the team to do work. The gradient of the line shows the team's productive hours per day. Once a project has completed and this capacity is known, it can then be used to estimate more accurately how long it will take to do future projects.

The Burndown Chart quickly communicates an aggregate figure of where the team is in the project. Also it shows how accurate the team is at estimating. If the project manager is regularly seeing up slopes in the chart they know the team needs to improve their forecasting.

Burndown Charts are simple to use, however, unlike the Gantt Charts they do not help a team understand the inter-dependencies between tasks and the knock on effect that delaying one task will have on another. Probably the best approach is to use both charts. The Gantt Chart can be used to create the initial project plan to understand dependencies and the ordering of work and then the Burndown Chart can track the work throughout the project.[:]